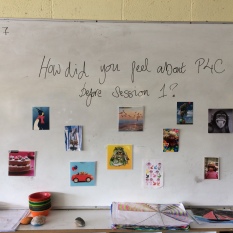 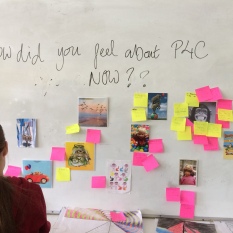 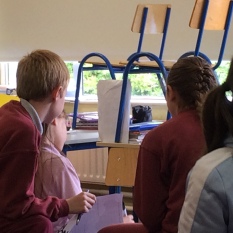 ‘Philosophy with children acknowledges them as capable thinkers and accords them an active role in the construction of knowledge. This NUIG philosophy initiative has, in line with Scoil Iognáid ethos created a learning space for enquiry and dialogue where talking and thinking about thinking are highly valued. The philosophy sessions have actively fostered the skills of questioning, predicting, contradicting and doubting and have enriched the quality of the children’s discussion and argumentative abilities… so much so that the  main question in Scoil Iognáid at the moment is ‘when are the philosophers coming back?!’

‘The children thoroughly enjoyed the sessions right from the start, admitting that they were somewhat apprehensive before P4C began, as they were unsure as to what exactly philosophy was.

After completing P4C, the children have a better understanding of the different types of questions that exist and how we pose a philosophical question. The children enjoyed discussing many philosophical questions including, ‘What is happiness?’ ‘Is karma real?’ ‘Why do we take and not give?’ and ‘Do we become more open minded as time goes on?’ There was a very respectful environment created in our class community during P4C, where children listened to what their peers had to say.

Having completed the four sessions of P4C, the children made comments such as, “Can you come back every week?” and “Can we do philosophy classes at secondary school?” Some children even said they are thinking about studying philosophy in university. There will be a P4C camp on during the summer at NUIG which I know some of the children are keen to attend.’

If you’re a teacher who’d like to invite Galway P4C to your school, please email: galwayp4c@gmail.com for further details.